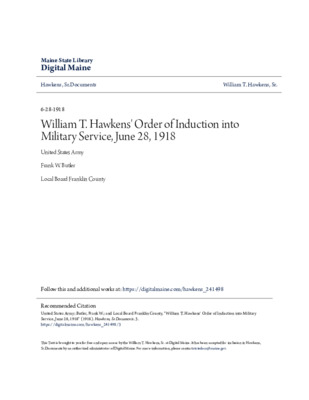 William T. Hawkens\u27 Order of Induction into the Military Service of the United States signed by Frank W. Butler on June 28, 1918. The day William was inducted into the military was the same day he got married. He got married first, and then went to be inducted. William\u27s eldest son, Earl Munroe Hawkens (sic.), returning from World War II, was a navigator on a B24 Liberator. He buzzed, on tree top, the town of Farmington, where his father was at the gas station where he worked, with his cap in hand, waving. Earl Munroe\u27s uncle, William\u27s brother, Earl R. Hawkens, and William\u27s wife, and Earl Munroe\u27s wife were all outside and waving as Earl Munroe flew over. He told his colleagues he had gotten confused and said he needed to go over familiar turf to get his bearings, but just wanted to fly over home.https://digitalmaine.com/hawkens_241498/1002/thumbnail.jp