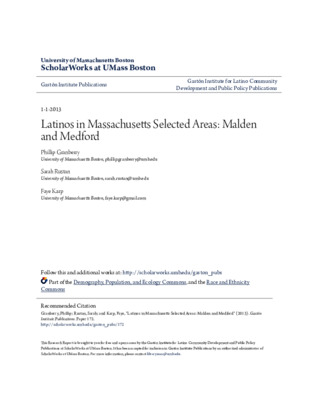 This report provides a descriptive snapshot of selected economic, social, educational, and demographic indicators pertaining to Latinos in the cities of Malden and Medford. It reflects a commitment by UMass Boston’s Mauricio Gastón Institute for Latino Community Development and Public Policy to provide periodic updates on the growing Latino population in Massachusetts. The report on Malden and Medford is part of a larger series that covers fourteen other cities, or clusters of cities, in the Commonwealth of Massachusetts. Each report analyzes data from the 2010 American Community Survey (ACS) conducted by the U.S. Census Bureau. Data are analyzed by Public Use Microdata Area (PUMA), which consists of a minimum population of 100,000 and is the smallest geographic area publically available for individual-level analysis. In the PUMA that combines these two similar-sized cities, the majority of the Latino population live in Malden (67.1%), while 32.9% live in Medford according to the 2010 Census. Since ACS data is collected from a sample of the population, there is some variation associated with each population estimate. In the bar graphs in this report, the ‘I’ that accompanies each bar represents the confidence interval for that estimate; we expect that another sample would generate an estimate within this interval 95% of the time. In this report, Latinos are compared to non-Latino whites, non-Latino blacks, and Asians for selected demographic, economic, and social characteristics. The number of ethno-racial groups included in a particular analysis may vary; each ethnoracial group is included in the analysis only when the observed sample size is large enough to produce reliable population estimates. In contrast to Latinos in other cities, this report finds that Latinos in Malden and Medford have a demographic profile similar to whites in many of these categories. Malden and Medford are home to an estimated 15,597 Latinos, who make up 13.5% of the cities’ population. Whites constitute the largest ethno-racial group (59.1%), while blacks account for 12.8% and Asians 11.3%