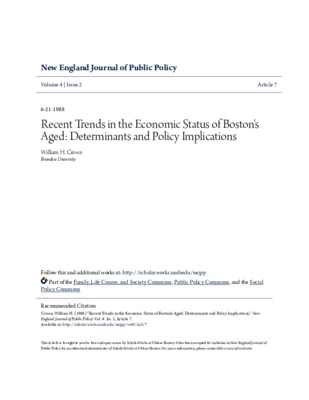 Recent Trends in the Economic Status of Boston\u27s Aged: Determinants and Policy Implications

The economic status of the older population has improved significantly since the early 1970s. Yet poverty rates among certain groups of elderly, especially older minorities, have declined very little. To understand the reasons for these seemingly contradictory trends, changes in the income composition of the elderly in Boston are compared to changes in income for the elderly in the United States. This analysis suggests that low-income older persons were largely bypassed by one of the major factors in income growth among the older population — growth in pension income. Despite the persistence of poverty among significant segments of the older population, it does not appear likely that federal programs for the aged poor will be expanded in the near future (given the current political environment engendered by large federal deficits). If this is the case, it suggests an increased role for state and local policy initiatives to improve the economic status of the aged poor. The number of such state and local policy options is limited, however. Employment programs might be helpful for improving the incomes of some older persons, but labor force participation rates among the aged poor are already very high. Many of the remaining elderly in poverty have health limitations or lack the necessary job skills for employment, even if training were more readily available. The most promising option for improving the cash incomes of the elderly living in poverty is to increase the state supplementation of SSI benefits, especially for older persons living alone