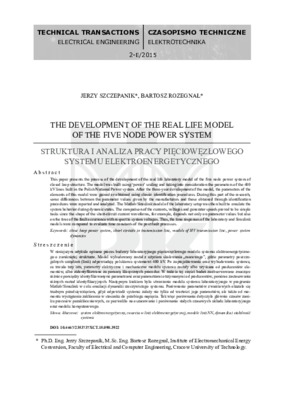 By Jerzy Szczepanik and Bartosz Rozegnał
Get PDF (5 MB)

This paper presents the process of the development of the real life laboratory model of the five node power system of closed loop structure. The model was built using ‘power’ scaling and taking into consideration the parameters of the 400 kV lines built in the Polish National Power system. After the three-year development of the model, the parameters of the elements of this model were gained or obtained using classic identification procedures. During this part of the research, some differences between the parameter values given by the manufacturers and those obtained through identification procedures were reported and analyzed. The Matlab/Simulink model of the laboratory setup was then built to emulate the system behavior during dynamic states. The comparison of the currents, voltages and generator speeds proved to be simple tasks since the shape of the short-circuit current waveforms, for example, depends not only on parameter values but also on the time of the fault occurrence with respect to system voltages. Thus, the time responses of the laboratory and Simulink models were compared to evaluate time constants of the post fault processes