Nowadays, nanocarbon is one of the most developed nanotechnology products. Carbon nanotubes are the most conducted nanocarbons because of their unique properties and structures, hence they are applied as hydrogen storages, nanoscale transistors, flat panel display, supercapasitors, nanoprobes, sensors, and catalysts.However, there is a structure limitation of carbon nanotubes for every application. Carbon nanotubes that ere fit for hydrogen storages, has single-walled, small diameter, long, and uniform. Quality of carbon nanotubes is not only influenced by the reaction temperatures of catalytic decomposition of methane, but also by the catalyst particle size which is influenced by catalyst preparation method.This research is to observe the quality and quantity of carbon nanotubes produced from catalytic decomposition of methane at various textural promoters in the Ni-Cu-based catalysts. The textural promoters (SiO2 , MgO, Al2O3) were added to the Ni-Cubased catalysts by impregnation method. Furthermore, the catalysts were packed to a reactor which is online with gas chromatography. The temperature inside the reactor is 700oC. The results analyzed are the catalyst characterization, methane conversion, carbon and hydrogen yields, and carbon characterization. Activity test shows that the Ni-Cu-SiO2 catalyst is the most active one with the average CH4 conversion of 93.30. SEM characterization shows that the Ni-Cu-Al2O3 catalyst is of producing carbon with smaller diameter (100-250 nm). This results is consistent with the XRD tests performed to determine the size of catalyst particles, where the catalyst with alumina as the textural promoter has the smallest diameter. Keywords: Carbon nanotube, impregnation, textural promoter, catalytic decomposition of methan 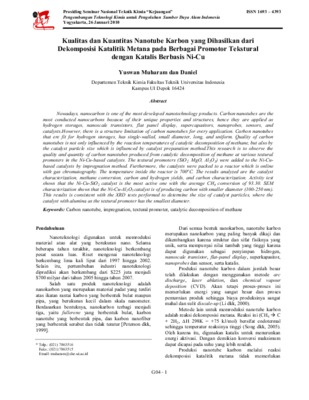