Domesticate：new things and the Chinese-Style Poerty

This paper first is set to illustrate the cultural significance of western new things represented especially by the Expo since the 19th century, which epitomizes its cultural and ideological framework. Second, compared with the Chinese traditional system of objects and its frame of thinking, shows the differences between western countries and China. Finally, to explain the role played by Japan in the naturalization progress from western things to Chinese traditional poetry, as an intermediary agent in the negotiation between Chineseand western cultures.東アジアの言語と表 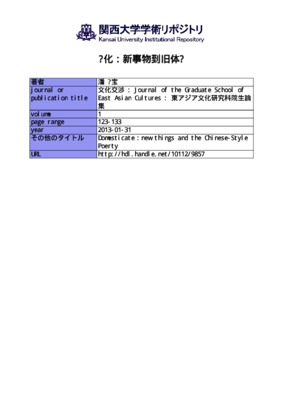