Recognition of Plague in the Great Plan-Based Theories : Focusing on "六沴" and Calamity

The rituals that worshiped those who have unnatural deaths were held in national rituals of East Asian countries. Among them, the note of "六厲之礼" was annotated to the oldest record. It has not been considered yet what kind of ritual it was. Therefore, this paper first analyzes the relationship between "五事", "五気" and "五行の沴", and reveals the origin of "六沴" and "六厲之礼" that it points to "六沴之礼". Also, after an examination of the disaster records and Wu-hsing Chih, the recognition of plague in the Great Planbased calamity can be seen that because of its indirectness and multiple occurrence, plague has not been regarded as much as other calamity. And its position was ambiguous. In conclusion, in the Great Plan-based theories, the possibility of using six kinds of illness as one idea, the "六厲", was low.文部科学省グローバルCOEプログラム 関西大学文化交渉学教育研究拠点［東アジアの歴史と動態 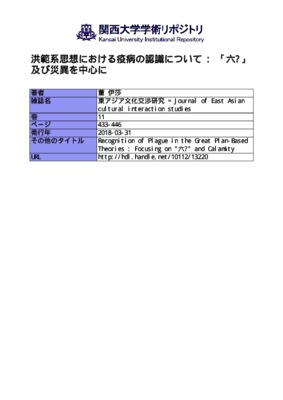