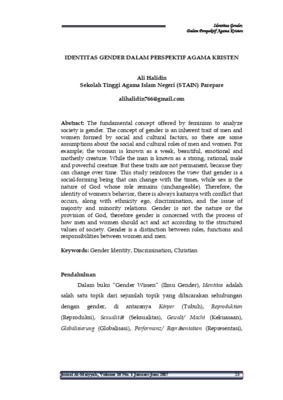 The fundamental concept offered by feminism to analyze society is gender. The concept of gender is an inherent trait of men and women formed by social and cultural factors, so there are some assumptions about the social and cultural roles of men and women. For example; the woman is known as a weak, beautiful, emotional and motherly creature. While the man is known as a strong, rational, male and powerful creature. But these traits are not permanent, because they can change over time. This study reinforces the view that gender is a social-forming being that can change with the times, while sex is the nature of God whose role remains (unchangeable). Therefore, the identity of women's behavior, there is always kaitanya with conflict that occurs, along with ethnicity ego, discrimination, and the issue of majority and minority relations. Gender is not the nature or the provision of God, therefore gender is concerned with the process of how men and women should act and act according to the structured values of society. Gender is a distinction between roles, functions and responsibilities between women and men