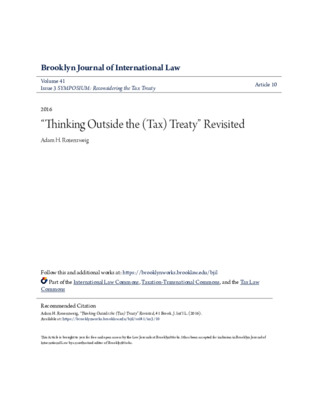 “Thinking Outside the (Tax) Treaty” Revisited

The rise and development of “Base Erosion and Profit Shifting” project by the Organization for Economic Cooperation and Development (BEPS) provides an ideal opportunity to revisit the fundamental principles underlying the international tax regime and the bilateral tax treaty regime in particular. This is true because BEPS represents both an attempt to create a new, truly multinational consensus on international tax matters and a clear move away from the bilateral tax treaty as the primary form of international coordination. From this perspective, BEPS provides the perfect opportunity to revisit the role of a proposed dispute resolution mechanism for nontreaty member countries, an idea proposed in the article Thinking Outside the (Tax) Treaty. (“Thinking”). The ultimate lesson of Thinking—that increasing cooperation of the least cooperative states in the world is as important, if not more important, to the ultimate success of the international tax regime—remains not only true post-BEPS but potentially crucial to the long-term success of BEPS. For these reasons, a nontreaty-based dispute resolution mechanism—whether housed in the OECD, the WTO, or otherwise—should be considered as a fundamental part of any institutional framework in a post-BEPS world