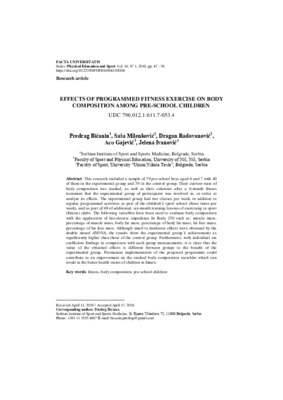 This research included a sample of 79 pre-school boys aged 6 and 7 with 40 of them in the experimental group and 39 in the control group. Their current state of body composition was studied, as well as their relations after a 6-month fitness treatment that the experimental group of participants was involved in, in order to analyze its effects. The experimental group had two classes per week, in addition to regular programmed activities as part of the children’s sport school (three times per week), and as part of 48 of additional, six-month training lessons of exercising in sport (fitness) clubs. The following variables have been used to evaluate body composition with the application of bio-electric impedance In Body 230 such as: muscle mass, percentage of muscle mass, body fat mass, percentage of body fat mass, fat free mass, percentage of fat free mass. Although small to moderate effects were obtained by the double mixed ANOVA, the results show the experimental group’s achievements as significantly higher than those of the control group. Furthermore, with individual eta coefficient findings in comparison with each group measurements, it is clear that the value of the obtained effects is different between groups to the benefit of the experimental group. Permanent implementation of the proposed programme could contribute to an improvement on the studied body composition variables which can result in the better health status of children in future.