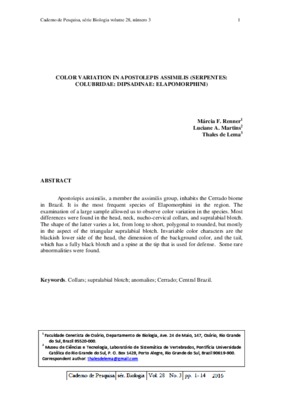 Apostolepis assimilis, a member the assimilis group, inhabits the Cerrado biome in Brazil. It is the most frequent species of Elapomorphini in the region. The examination of a large sample allowed us to observe color variation in the species. Most differences were found in the head, neck, nucho-cervical collars, and supralabial blotch. The shape of the latter varies a lot, from long to short, polygonal to rounded, but mostly in the aspect of the triangular supralabial blotch. Invariable color characters are the blackish lower side of the head, the dimension of the background color, and the tail, which has a fully black blotch and a spine at the tip that is used for defense. Some rare abnormalities were found