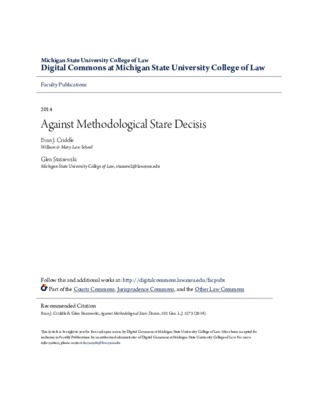 By Evan J. Criddle and Glen Staszewski
Get PDF (164 KB)

Should federal courts give stare decisis effect to statutory interpretation methodology? Although a growing number of legal scholars have answered this question in the affirmative, this Essay makes the case against methodological stare decisis. Drawing on recent empirical studies of Congress’s expectations regarding statutory interpretation, we show that existing knowledge of Congress’s expectations is insufficient to settle on one consistent approach to statutory interpretation. Moreover, Congress has almost certainly changed its expectations over time, and this raises serious problems for methodological stare decisis from the perspective of faithful-agency theories. We argue further that many theories and doctrines of statutory interpretation are based on constitutional norms and other public values that do not depend on Congress’s meta-intent. Constitutional norms and public values also change, and interpretive methodology should remain dynamic so that the law can be responsive to changing societal norms. Finally, we argue that the value of extending stare decisis effect to interpretive methodology is unproven. Although treating prior methodological decisions as binding precedent could, in theory, promote the policies underlying stare decisis, the same would be true of extending that doctrine to virtually any rules. Yet interpretive methodology is different from first-order rules of law in significant ways, and freezing higher-order legal rules into place would pose special and perhaps overwhelming difficulties. We therefore conclude that federal courts should not extend stare decisis effect to methodological decisions without seriously grappling with these difficulties and demanding much stronger evidence that such a move would improve the operation of our legal system