The ability to extract word-forms from sentential contexts represents an initial step in infants' process toward lexical acquisition. By age 6 months the ability is just emerging and evidence of it is restricted to certain testing conditions. Most research has been developed with infants acquiring stress-timed languages (English, but also German and Dutch) whose rhythmic unit is not the syllable. Data from infants acquiring syllable-timed languages are still scarce and limited to French (European and Canadian), partially revealing some discrepancies with English regarding the age at which word segmentation ability emerges. Research reported here aims at broadening this cross-linguistic perspective by presenting first data on the early ability to segment monosyllabic word-forms by infants acquiring Spanish and Catalan. Three different language groups (two monolingual and one bilingual) and two different age groups (8- and 6-month-old infants) were tested using natural language and a modified version of the HPP with familiarization to passages and testing on words. Results revealed positive evidence of word segmentation in all groups at both ages, but critically, the pattern of preference differed by age. A novelty preference was obtained in the older groups, while the expected familiarity preference was only found at the younger age tested, suggesting more advanced segmentation ability with an increase in age. These results offer first evidence of an early ability for monosyllabic word segmentation in infants acquiring syllable-timed languages such as Spanish or Catalan, not previously described in the literature. Data show no impact of bilingual exposure in the emergence of this ability and results suggest rapid gains in early segmentation for words that match the rhythm unit of the native language 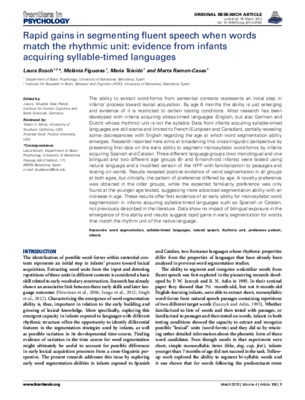