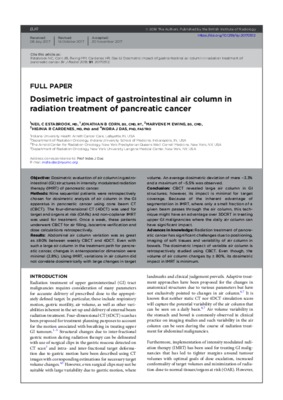 OBJECTIVE: Dosimetric evaluation of air column in gastrointestinal (GI) structures in intensity modulated radiation therapy (IMRT) of pancreatic cancer. METHODS: Nine sequential patients were retrospectively chosen for dosimetric analysis of air column in the GI apparatus in pancreatic cancer using cone beam CT (CBCT). The four-dimensional CT (4DCT) was used for target and organs at risk (OARs) and non-coplanar IMRT was used for treatment. Once a week, these patients underwent CBCT for air filling, isocentre verification and dose calculations retrospectively. RESULTS: Abdominal air column variation was as great as ±80% between weekly CBCT and 4DCT. Even with such a large air column in the treatment path for pancreatic cancer, changes in anteroposterior dimension were minimal (2.8%). Using IMRT, variations in air column did not correlate dosimetrically with large changes in target volume. An average dosimetric deviation of mere -3.3% and a maximum of -5.5% was observed. CONCLUSION: CBCT revealed large air column in GI structures; however, its impact is minimal for target coverage. Because of the inherent advantage of segmentation in IMRT, where only a small fraction of a given beam passes through the air column, this technique might have an advantage over 3DCRT in treating upper GI malignancies where the daily air column can have significant impact. Advances in knowledge: Radiation treatment of pancreatic cancer has significant challenges due to positioning, imaging of soft tissues and variability of air column in bowels. The dosimetric impact of variable air column is retrospectively studied using CBCT. Even though, the volume of air column changes by ± 80%, its dosimetric impact in IMRT is minimum