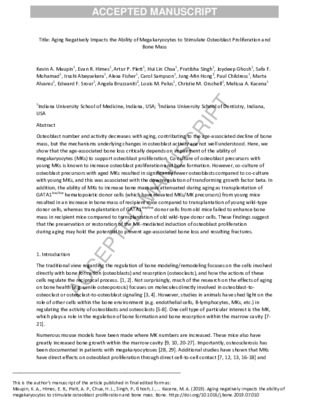 Osteoblast number and activity decreases with aging, contributing to the age-associated decline of bone mass, but the mechanisms underlying changes in osteoblast activity are not well understood. Here, we show that the age-associated bone loss critically depends on impairment of the ability of megakaryocytes (MKs) to support osteoblast proliferation. Co-culture of osteoblast precursors with young MKs is known to increase osteoblast proliferation and bone formation. However, co-culture of osteoblast precursors with aged MKs resulted in significantly fewer osteoblasts compared to co-culture with young MKs, and this was associated with the downregulation of transforming growth factor beta. In addition, the ability of MKs to increase bone mass was attenuated during aging as transplantation of GATA1low/low hematopoietic donor cells (which have elevated MKs/MK precursors) from young mice resulted in an increase in bone mass of recipient mice compared to transplantation of young wild-type donor cells, whereas transplantation of GATA1low/low donor cells from old mice failed to enhance bone mass in recipient mice compared to transplantation of old wild-type donor cells. These findings suggest that the preservation or restoration of the MK-mediated induction of osteoblast proliferation during aging may hold the potential to prevent age-associated bone loss and resulting fractures