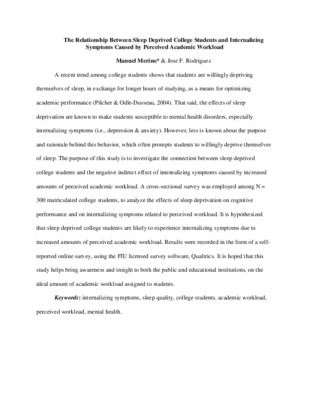 A recent trend among college students shows that students are willingly depriving themselves of sleep, in exchange for longer hours of studying, as a means for optimizing academic performance (Pilcher & Odle-Dusseau, 2004). That said, the effects of sleep deprivation are known to make students susceptible to mental health disorders, especially internalizing symptoms (i.e., depression & anxiety). However, less is known about the purpose and rationale behind this behavior, which often prompts students to willingly deprive themselves of sleep. The purpose of this study is to investigate the connection between sleep deprived college students and the negative indirect effect of internalizing symptoms caused by increased amounts of perceived academic workload. A cross-sectional survey was employed among N = 300 matriculated college students, to analyze the effects of sleep deprivation on cognitive performance and on internalizing symptoms related to perceived workload. It is hypothesized that sleep deprived college students are likely to experience internalizing symptoms due to increased amounts of perceived academic workload. Results were recorded in the form of a self-reported online survey, using the FIU licensed survey software, Qualtrics. It is hoped that this study helps bring awareness and insight to both the public and educational institutions, on the ideal amount of academic workload assigned to students