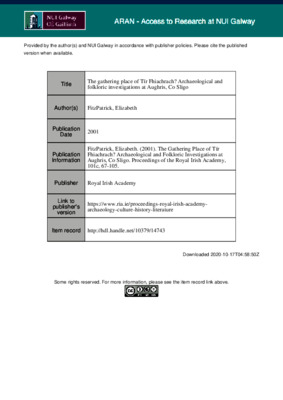 By Elizabeth FitzPatrick
Get PDF (13 MB)

This paper explores evidence for modern popular gatherings on Aughris head land, Co. Sligo, and attempts to define the landscape on the headland where medieval royal assembly may also have taken place. The spatial limits of the overall study are the coastline of Aughris townland and the adjoining townlands of Garryduff, Kilrusheighter and Rathglass. The preliminary results of three summers of fleldwork (1999-2001) are presented, together with documentary and folklore surveys. It is proposed that 'Coggins' Hill' in Kilrusheighter is possibly the hitherto unidentified post-Norman inauguration site of the Ui Dhubhda chiefs of Tir Fhiachrach, referred to as Cam Inghine Briain in a prose tract on Ui Fhiachrach preserved in the Book of Lecan. The possibility is also raised that 'Healy's Round HilV and its environs, north of Kilrusheighter on the west side of Aughris headland, may have constituted the site of an early medieval oenach (tribal assembly). In so far as the evidence allows, a retrogressive approach to understand ing this landscape of assembly is undertapeer-reviewe