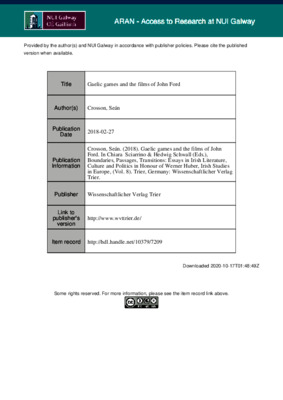 Gaelic games and the films of John Ford

This peer-reviewed chapter emerged further to ongoing research into the representations of Gaelic games in the cinema and is focused on films directed, or part-directed, by John Ford, in particular The Quiet Man (1952), The Rising of the Moon (1957), and Young Cassidy (1965). For Ford, Gaelic games would seem to have provided a useful motif encapsulating prevailing stereotypes regarding the Irish, including their alleged proclivity for violence. Where referred to, hurling in particular seems inevitably to proceed or suggest an occasion of violence in Ford s work. However, these allusions also reveal Ford s tendency towards self-interrogation, to raise doubts at key moments about their own veracity (Luke Gibbons) in the director s focus as much on the prejudiced reactions of those unfamiliar with the sport of hurling as on the sport itself, never actually depicted in his films. Furthermore, Ford realized the performative potential of Irish stereotypes, exploiting in the process the comic potential of hurling (a process also evident in earlier American cinema) to diffuse anxieties regarding the Irish, and to help integrate Irish-American culture into mainstream American life.Peer reviewe