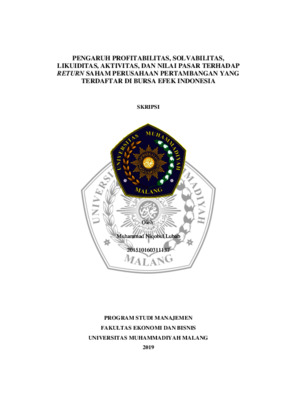 This study aims to determine the impact of profitability ratio, solvability ratio, liquidity ratio, activity ratio and market value ratio to stock return. Data used in this study is secondary data, which was obtained from the IDX, namely financial statements from 2015-2017. Population amounted to 47 mining companies that have been and are still listed on the Indonesia Stock Exchange for the period 2015-2017. Sample selection technique used a purposive sampling method and obtained 18 mining companies that were used as samples. The data analysis technique used is multiple linier regression analysis. Based on the results of data analysis, partially the profitability ratio, solvability ratio, liquidity ratio and market value ratio have the significant influence to stock return, while activity ratio don’t have the significant influence to stock return. The goodness of fit model test results shows that the regression model can be used to predict earnings per share as evindenced by the F significance value of 0.000. The adjusted R square value of 0.728 indicates that hte ability of the independen variable in explaining the variation of the dependent variabel is 72,8%, and the remaining 27,2% is explained by other variables the research model