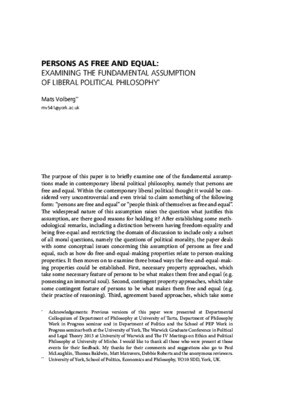 Persons as free and equal: Examining the fundamental assumption of liberal political philosophy

The purpose of this paper is to briefl y examine one of the fundamental assumptions made in contemporary liberal political philosophy, namely that persons are free and equal. Within the contemporary liberal political thought it would be considered very uncontroversial and even trivial to claim something of the following form: “persons are free and equal” or “people think of themselves as free and equal”. The widespread nature of this assumption raises the question what justifies this assumption, are there good reasons for holding it? After establishing some methodological remarks, including a distinction between having freedom-equality and being free-equal and restricting the domain of discussion to include only a subset of all moral questions, namely the questions of political morality, the paper deals with some conceptual issues concerning this assumption of persons as free and equal, such as how do free-and-equal-making properties relate to person-making properties. It then moves on to examine three broad ways the free-and-equal-mak-ing properties could be established. First, necessary property approaches, which take some necessary feature of persons to be what makes them free and equal (e.g. possessing an immortal soul). Second, contingent property approaches, which take some contingent feature of persons to be what makes them free and equal (e.g heir practise of reasoning). Third, agreement based approaches, which take some agreement or contract among persons to be the basis for their being free and equal (e.g. evolutionary emergence of our treatment of others). Strengths and weaknesses of all approaches will be examined