Hutcheson's Idea of Beauty and the Doomsday Scenario

Francis Hutcheson is generally accepted as producing the first systematic study of aesthetics, in the first treatise of An Inquiry into the Original of Our Ideas of Beauty and Virtue, initially published in 1725. His theory reflected the eighteenth century concern with beauty rather than art, and has drawn accusations of vagueness since the first critical response, by Charles Louis DeVillete in 1750. The most serious critique concerns the idea of beauty itself: whether it was simple or complex, and the idea of a primary or secondary quality. It is the latter question I shall answer, attempting to clarify the problematic passage that appears at the end of the first section of Hutcheson’s first treatise 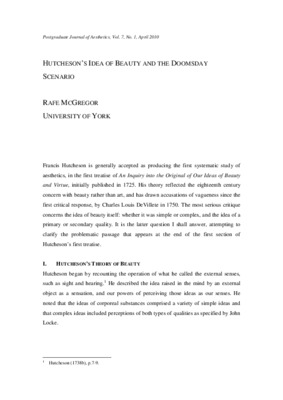