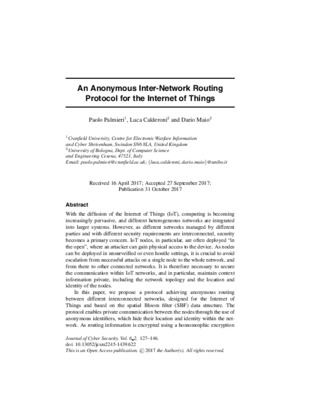 An Anonymous Inter-Network Routing Protocol for the Internet of Things

With the diffusion of the Internet of Things (IoT), computing is becoming increasingly pervasive, and different heterogeneous networks are integrated into larger systems. However, as different networks managed by different parties and with different security requirements are interconnected, security becomes a primary concern. IoT nodes, in particular, are often deployed “in the open”, where an attacker can gain physical access to the device. As nodes can be deployed in unsurveilled or even hostile settings, it is crucial to avoid escalation from successful attacks on a single node to the whole network, and from there to other connected networks. It is therefore necessary to secure the communication within IoT networks, and in particular, maintain context information private, including the network topology and the location and identity of the nodes. In this paper, we propose a protocol achieving anonymous routing between different interconnected networks, designed for the Internet of Things and based on the spatial Bloom filter (SBF) data structure. The protocol enables private communication between the nodes through the use of anonymous identifiers, which hide their location and identity within the network. As routing information is encrypted using a homomorphic encryption scheme, and computed only in the encrypted domain, the proposed routing strategy preserves context privacy, preventing adversaries from learning the network structure and topology. This, in turn, significantly reduces their ability to gain valuable network information from a successful attacks on a single node of the network, and reduces the potential for attack escalation