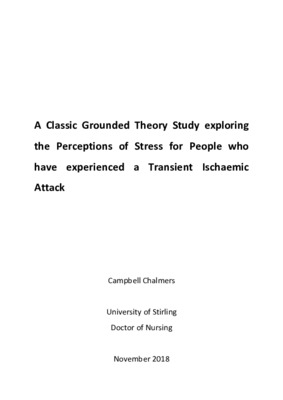 By Campbell Chalmers
Get PDF (7 MB)

Background: Stress is a known risk factor for stroke, but there is a lack of understanding of the role stress plays in transient ischaemic attack (TIA). TIA is a warning sign of stroke, but effective management of risk factors can reduce the threat for the individual. Research Aim and Questions: The aim was to explore the perceptions of stress for people who have experienced a TIA and address the following questions: 1. What is the patients’ understanding of the relationship between perceived stress and TIA? 2. How has perceived stress affected the patients’ physical and mental health and well-being? 3. What actions has the patient taken to influence perceived stress and have these actions made a difference? Methodology and Methods: The study was conducted following a classic grounded theory tradition. Thirteen semi-structured interviews were undertaken with people who had experienced a TIA. Participants were recruited from outpatient clinics located in three Scottish Health Boards. Findings: Perceived stress was commonly experienced by participants and it was a significant feature throughout their TIA journey. Although not universally acknowledged as a contributing cause of TIA, stress formed part of their lived experiences. The presence or absence of perceived stress was an influencing force in relation to their mental and physical health and well-being. Factors that influenced stress could stabilise or destabilise a sense of equilibrium. Equilibrium was the achievement of a balance between interdependent elements and formed the core category: the equilibrium of health and well-being for the individual. Conclusions: The study led to the discovery of the substantive theory: if perceived stress can be effectively self-managed after a TIA, a state of equilibrium can be achieved which supports health and well-being. This new knowledge raises the opportunity to improve health and well-being after TIA and potentially reduce the risk of stroke