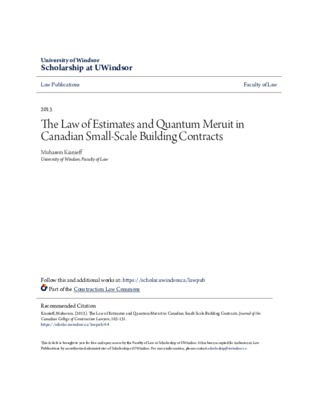 This paper discusses the legal regime that governs estimates given by building contractors to owners of small businesses. The paper examines the present common law approaches that attempt to adjudicate disputes between contractors and owners by examining the law of estimates and quantum meruit respectively. It is argued that the law has developed in a particular manner in order to protect contractors from information asymmetries vis-à-vis owners in the context of large-scale construction projects. These information asymmetries are not present between owners vis-à-vis contractors in the small scale context, with the end result being that contractors are able to rely on some of the legal devices and doctrines to their advantage against owners. Some recent court decisions have attempted to adjudicate the issue however many of these cases tend to be decided on the basis of findings of fact rather than applying the developed caselaw. The paper argues that transactions costs and uncertainties can be minimized if legislatures were to adopt a bright line rule similar to that in effect in the Province of Ontario with respect to consumer transactions whereby building contracts cannot exceed estimated amounts by more than ten percent. It is argued that this approach brings with it more predictability for small business and also provides a powerful incentive for contractors to take reasonable care in providing estimates to clients who rely on their expertise