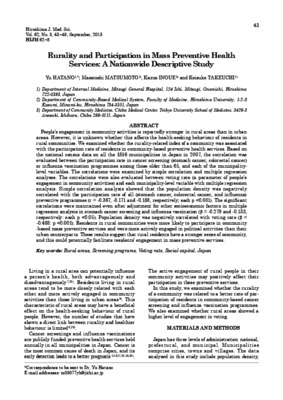 People's engagement in community activities is reportedly stronger in rural areas than in urban areas. However, it is unknown whether this affects the health-seeking behaviour of residents inrural communities. We examined whether the rurality-related index of a community was associatedwith the participation rate of residents in community-based preventive health services. Based on the national census data on all the 1816 municipalities in Japan in 2007, the correlation was evaluated between the participation rate in cancer screening (stomach cancer, colorectal cancer) or influenza vaccination programmes among those older than 65, and each of the municipalitylevel variables. The correlations were examined by simple correlation and multiple regression analyses. The correlations were also evaluated between voting rate (a parameter of people's engagement in community activities) and each municipality-level variable with multiple regression analysis. Simple correlation analysis showed that the population density was negatively correlated with the participation rate of all (stomach cancer, colorectal cancer, and influenza) preventive programmes (r = -0.367, -0.171 and -0.188, respectively; each p <0.001). The significant correlations were maintained even after adjustment for other socioeconomic factors in multiple regression analysis in stomach cancer screening and influenza vaccination (β = -0.279 and -0.133, respectively: each p <0.05). Population density was negatively correlated with voting rate (β = -0.488: p <0.001). Residents in rural communities were more likely to participate in community -based mass preventive services and were more actively engaged in political activities than their urban counterparts. These results suggest that rural residents have a stronger sense of community, and this could potentially facilitate residents' engagement in mass preventive services