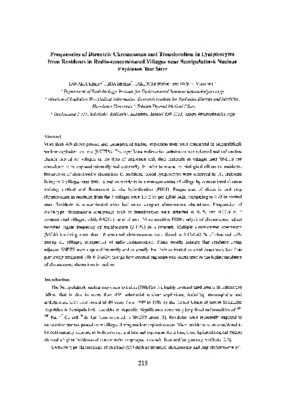 More than 400 above-ground and underground nuclear explosion tests were conducted at Semipalatinsk nuclear explosion test site (SNETS). The significant radioactive substances was released and radioactive plumes moved on villages at the time of explosion test, then residents in villages near SNETS are considered to be exposed internally and externally. In order to assess the biological effects on residents, frequencies of chromosome aberrations in peripheral blood lymphocytes were observed in 116 residents living in 3 villages near SNETS and 46 residents in a non-contaminated village by conventional Giemsa staining method and fluorescent in situ hybridization (FISH). Frequencies of dicentric and ring chromosomes in residents from the 3 villages were 1.5-2.55 per 1,000 cells, comparing to 0.78 in control area. Residents in contaminated areas had more complex chromosome aberrations. Frequencies of stable-type chromosome aberrations such as translocation were detected in 0.1% and 0.07% in 2 contaminated villages, while 0.02% in control area. More sensitive FISH analysis of chromosome subset revealed higher frequency of translocation (2.17%) in a resident. Multiple chromosome aberrations (MCA) involving more than 10 abnormal chromosomes were found in 0.12-0.42 % of observed cells among all villages, irrespective of radio-contamination. These results indicate that residents living adjacent SNETS were exposed internally and externally, but their estimated external doses were less than previously estimated 140-440 mGy, though how internal exposure was contributed to the higher incidence of chromosome aberrations is unclear