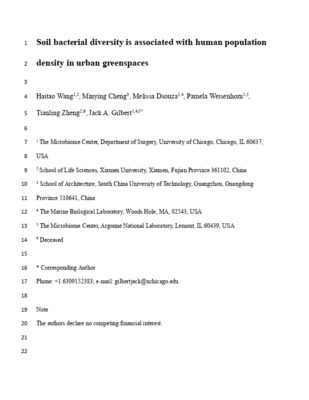 Author Posting. © The Author(s), 2018. This is the author's version of the work. It is posted here by permission of American Chemical Society for personal use, not for redistribution. The definitive version was published in Environmental Science and Technology 52 (2018): 5115–5124, doi:10.1021/acs.est.7b06417.Urban greenspaces provide extensive ecosystem services, including pollutant remediation, water management, carbon maintenance, and nutrient cycling. However, while the urban soil microbiota underpin these services, we still have limited understanding of the factors that influence their distribution. We characterized soil bacterial communities from turf-grasses associated with urban parks, streets and residential sites across a major urban environment, including a gradient of human population density. Bacterial diversity was significantly positively correlated with the population density; and species diversity was greater in park and street soils, compared to residential soils. Population density and greenspace type also led to significant differences in the microbial community composition that was also significantly correlated with soil pH, moisture and texture. Co-occurrence network analysis revealed that microbial guilds in urban soils were well correlated. Abundant soil microbes in high density population areas had fewer interactions, while abundant bacteria in high moisture soils had more interactions. These results indicate the significant influence of changes in urban demographics and land-use on soil microbial communities. As urbanization is rapidly growing across the planet, it is important to improve our understanding of the consequences of urban zoning on the soil microbiota.This study is supported by the Earth Microbiome Project (http://www.earthmicrobiome.org/) and the China Scholarship Council (http://en.csc.edu.cn/).2019-04-0