Trans Affects: Performance, Technology, and the Racialization of Femininity

Recognizing performance and technology as entangled modes of bodily expression, Trans Affects: Performance, Technology, and the Racialization of Femininity examines how Western tropes of Asian and Asian American femininity continue to shape differently sexed and gendered bodies. Drawing on Asian and Asian American artists in relation to U.S. contexts, this study enacts close readings of performances of hypersexuality, drag, and the trans body as they intersect with photography, Internet culture, multimedia installations, viral videos, biomedia, and emerging technologies. Specifically, the dissertation focuses on four contemporary artists: Laurel Nakadate, Ming Wong, Luo, and Yozmit. Employing “trans” as a theoretical lens to highlight affective capacities of art, I argue that “trans affects” in these performances resist the binary choice to either reject tropes or accept them as totalizing. The set of artists I explore do not engage in direct opposition to the stereotypes or tropes forwarded by processes of racialized femininity. Instead, they operate in more diffuse modes of affirmation, destabilization, confusion, and play, pointing to the possibilities that indeterminacy might offer politics and ethics. Trans affects accounts for the temporal crossings of affect and the political resistances of trans. As such, trans affects offers modes both of reading and politics. This study employs critical cultural methodologies, historically situating contemporary medial performances in cultural, linguistic, and political context. Through critical race/ethnic studies, queer theory, trans studies, and feminist theory, this interdisciplinary project demonstrates how performing and media-making might counter dominant normativizing modes of representation. Where scholarship on performance and technology has tended to eschew connections amongst race, gender, and sexuality, this project advances a comparative account of transnational racialized femininity in women, men, and those who defy the gender/sex binary. Moreover, where Asian and Asian American gender and sexuality studies have tended to focus on problems of representation, this dissertation offers tactics for resistance.Doctor of Philosoph 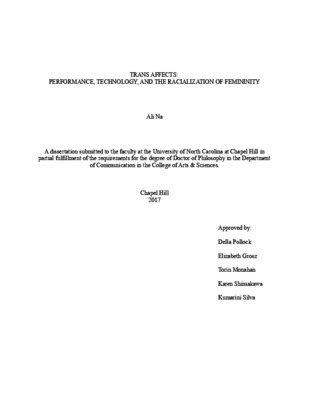 This paper was published in Carolina Digital Repository.