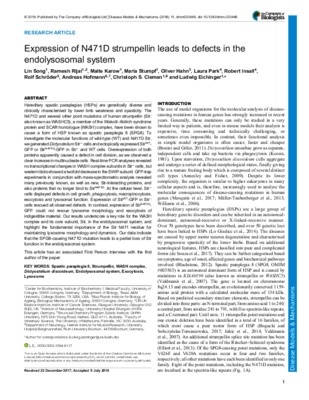 Expression of N471D strumpellin leads to defects in the endolysosomal system

Hereditary spastic paraplegias (HSPs) are genetically diverse and clinically characterised by lower limb weakness and spasticity. The N471D and several other point mutations of human strumpellin (Str; also known as WASHC5), a member of the Wiskott–Aldrich syndrome protein and SCAR homologue (WASH) complex, have been shown to cause a form of HSP known as spastic paraplegia 8 (SPG8). To investigate the molecular functions of wild-type (WT) and N417D Str, we generated Dictyostelium Str− cells and ectopically expressed StrWT-GFP or StrN471D-GFP in Str− and WT cells. Overexpression of both proteins apparently caused a defect in cell division, as we observed a clear increase in multinucleate cells. Real-time PCR analyses revealed no transcriptional changes in WASH complex subunits in Str− cells, but western blots showed a twofold decrease in the SWIP subunit. GFP-trap experiments in conjunction with mass-spectrometric analysis revealed many previously known, as well as new, Str-interacting proteins, and also proteins that no longer bind to StrN471D. At the cellular level, Str− cells displayed defects in cell growth, phagocytosis, macropinocytosis, exocytosis and lysosomal function. Expression of StrWT-GFP in Str− cells rescued all observed defects. In contrast, expression of StrN471D-GFP could not rescue lysosome morphology and exocytosis of indigestible material. Our results underscore a key role for the WASH complex and its core subunit, Str, in the endolysosomal system, and highlight the fundamental importance of the Str N471 residue for maintaining lysosome morphology and dynamics. Our data indicate that the SPG8-causing N471D mutation leads to a partial loss of Str function in the endolysosomal system.Full Tex