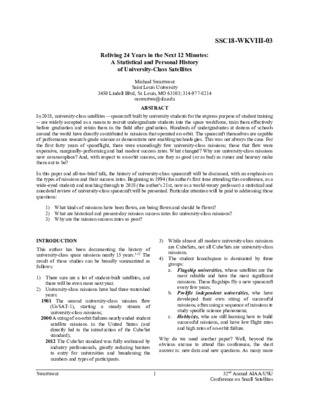 Reliving 24 Years in the next 12 Minutes: A Statistical and Personal History of University-Class Satellites

By Michael Swartwout
Get PDF (1 MB)

In 2018, university-class satellites -- spacecraft built by university students for the express purpose of student training -- are widely accepted as a means to recruit undergraduate students into the space workforce, train them effectively before graduation and retain them in the field after graduation. Hundreds of undergraduates at dozens of schools around the world have directly contributed to missions that operated on-orbit. The spacecraft themselves are capable of performance research-grade science or demonstrate new enabling technologies. This was not always the case. For the first forty years of spaceflight, there were exceedingly few university-class missions; those that flew were expensive, marginally-performing and had modest success rates. What changed? Why are university-class missions now commonplace? And, with respect to on-orbit success, are they as good (or as bad) as rumor and hearsay make them out to be? In this paper and all-too-brief talk, the history of university-class spacecraft will be discussed, with an emphasis on the types of missions and their success rates. Beginning in 1994 (the author\u27s first time attending this conference, as a wide-eyed student) and reaching through to 2018 (the author\u27s 21st, now as a world-weary professor) a statistical and anecdotal review of university-class spacecraft will be presented. Particular attention will be paid to addressing these questions: 1) What kinds of missions have been flown, are being flown and should be flown? 2) What are historical and present-day mission success rates for university-class missions? 3) Why are the mission success rates so poor