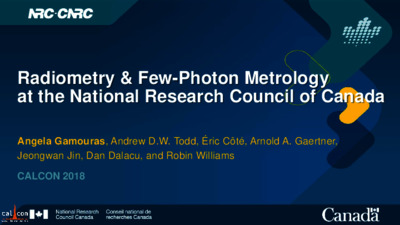 Over the last few years, the National Research Council of Canada (NRC) has been establishing new facilities and improving capabilities in three areas of radiometry: optical power, spectral irradiance, and few-photon measurements. Canada’s realization of the optical radiant power scale now utilizes a new cryogenic electrical substitution radiometer as the primary instrument. With higher cavity absorptance, reduced non-equivalence effects, and a closed-cycle helium cryocooler, this new cryogenic radiometer has significantly contributed to improvements in measurement uncertainties. NRC’s primary spectral irradiance scale has transitioned from a detector based approach to a detector and source based realization. Filter radiometers with spectral responsivity traceable to the cryogenic radiometer and a high temperature blackbody primary light source are implemented in the calibration of transfer standard FEL lamps from 200 nm to 2500 nm. Most recently, NRC has been working to establish a few-photon metrology capability for optical radiometry. The initial goal of this new facility is to measure the detection efficiency of free-space single-photon detectors using a calibrated detector substitution technique. This capability will then be extended to the traceable characterization of NRC on-chip semiconductor quantum dot-based single-photon sources, the evaluation of these sources as new quantum standards, and using entangled photons from these sources for fundamental quantum metrology measurements. Ongoing efforts and details of these new radiometry facilities will be presented