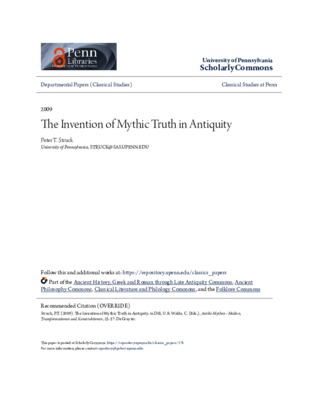 The Invention of Mythic Truth in Antiquity

It is commonly understood that the Greek term mythos means something entirely different from the modern definitions of \u27myth\u27. Liddell and Scott tells the most authoritative version of the story: in Homer the term is a rather generic word for speech, and by the classical period it comes to mean something like a tall tale, usually a false and absurd one. Plato in the Gorgias opposes a mythos to a logos (a rational account) and to speaking truthfully: Listen, then, as they say, to a beautiful story, which you will consider a myth, I think, but which I consider an actual accont (logon); for the things which I am about to tell, I will tell as the truth (Plat. Gorg. 523a). Aristotle later coins it to mean the plot of a tragedy, and there the story seems to end. Though I have of course streamlined a bit, there are no other major developments. The ancient traditions of mythography do very little to challenge this narrative, since they display mostly antiquarian interest, where the concern for any truth-value is bracketed