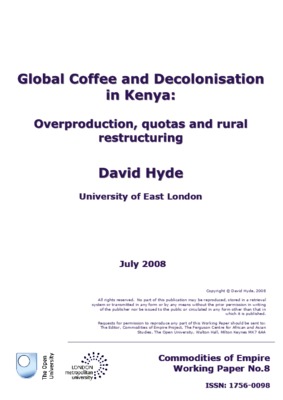 Commodities of Empire: Working Paper No. 8: Following the 1930s depression, the recovery of coffee production was lifted by wartime price supports and sustained by the primary commodities boom which entered into a cycle of decline from the mid-fifties. The ensuing period became one of deepening financial crisis for coffee producing countries. Even so, the Latin American producers continued to increase their production bringing on a glut in world markets. This unleashed intense competitive struggles amongst global producers for larger slices of a contracting market. The prospect of an economic catastrophe, following the release of surplus stocks, preoccupied Kenya’s colonial government which, whilst dependent on tax revenues derived from coffee sales, was less able to support the settler dominated industry in face of the increased costs incurred by the Mau Mau Emergency after 1952. This left the settlers exposed when many were barely able to recover their costs of production. Unrelenting global market pressures then compelled the colonial government to beckon low cost African farmers into coffee production in a bid to save its tax base. Changes in the organisation and regulation of the commodity chain, which were globally driven, were decisive in reconfiguring the economic and social relationships which underpinned Kenya’s independence