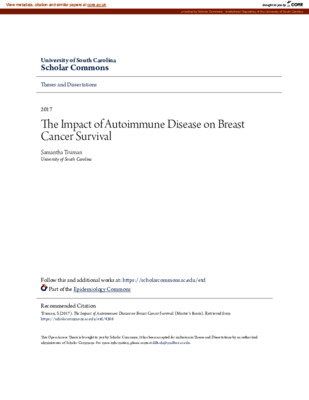 The Impact of Autoimmune Disease on Breast Cancer Survival

Background Breast cancer is the second leading cause of cancer death for women in developed countries, while autoimmune disease effects approximately 10 million people in the United States, of which approximately 80% are female. Both diseases are associated with hormonal risk factors and are related to the divergent effects of the cellular and humoral immunity that is associated with the T-helper 1 and T-helper 2 immune response. To investigate the potential implications that autoimmune disease may have on breast cancer-specific mortality, we have conducted a population-based retrospective cohort study of women who were diagnosed with breast cancer between January 1, 1996 to December 31, 2010 in South Carolina. Methods This study included 3,286 female breast cancer patients. The participants were identified through administrative claims databases, the South Carolina Medicaid Program and the South Carolina State Employee Health Plan, and were linked by a unique identifier to the South Carolina Central Cancer Registry. The autoimmune disease (AD) cohort was identified as those that had at least one AD present (n = 629), while those without an AD diagnosis were placed into a second cohort (n = 2,657). A secondary analysis was performed identifying those with a T-helper 1 (Th1) dominant AD and a T-helper 2 (Th2) dominant AD; these two groups were then compared to those without an AD present. Kaplan Meier and Cox regression was used to test for associations between AD and breast cancer-specific survival. Results Breast cancer-specific survival was not significantly different between the AD and no AD cohorts. However, the crude analysis showed a significant reduction in breast cancer mortality (54%) for those with a Th1 dominant AD compared to those without an AD. When controlling for chemotherapy and radiation therapy, the relationship remained significant with a 55% reduction in breast cancer mortality among those with a Th1 dominant AD compared to those without an AD (HR: 0.45, 95% CI: 0.23, 0.87). Conclusion Among women who are diagnosed with breast cancer, the presence of a Th1 dominant AD is significantly associated with a 54% reduced risk of breast cancer mortality