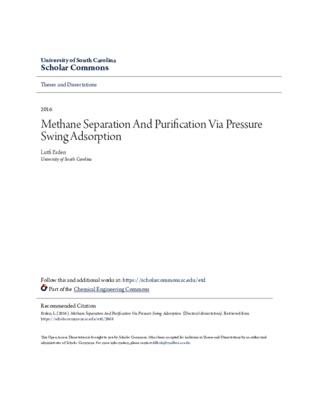 Investigations on alternative energy sources have gained increasing attention due to significant shortage in the fossil fuel reserves and increase on the usage of internal combustion engines. Natural gas which mainly consists of Methane has a significant role in short term solution of this issue. Although methane as a greenhouse gas is over 20 times more potent by weight than carbon dioxide, if released directly into the atmosphere, it is a valuable energy source. However, methane is not extracted % 100 pure from the source. Natural gas generally contains many other contaminants such as water, other hydrocarbons, Carbon dioxide, Nitrogen, Sulphur compounds, Helium, etc. The concentration of methane and also other contaminants in the extracted natural gas may differ based on the reservoir and extracting method. Hence, methane needs to be purified to meet the specifications of transportation. In these study the goal is to separate pretreated methane mixture from Nitrogen (Chapter 1) and Carbon dioxide (Chapters 2-4). The target is to have methane purities above 97 % with a recovery above 90 %. Chapter 1 is mainly focused on the methane separation from pretreated Landfill gas with a concentration of 86 % methane, 12 % Nitrogen and 1 % Carbon dioxide and Oxygen. This chapter is a simulation study for landfill methane separation via Pressure Vacuum Swing Adsorption with BPL Activated carbon filled beds. A four bed- four step PSA cycle with three different versions of Heavy Reflux step was used. It was mainly investigated the effect of Heavy reflux type used in the PSA cycle and its influence on the final product performances and energy requirements. It was also revealed the effect of Reflux Ratio and feed throughput. Chapter 2 is another simulation study for the purification of methane out of a binary mixture 75 % Methane and 25 % Carbon dioxide by using layered bed Pressure Swing Adsorption cycles. The study reveals the effect of layer combinations of adsorbents in use (Carbon molecular sieve and 13-X zeolite). Moreover the effect of mixed binary gas adsorption isotherms was studied by using both Perfect Positive and Perfect Negative fashion on both adsorbents. Chapter 3 is focused on experimental study with single-bed PSA experimental set-up with carbon molecular sieve and 13-X zeolite for 75 % methane and 25 % carbon dioxide binary mixture. This study reveals the effect of feed throughput and also gives a rough estimation of which binary gas adsorption isotherm is more accurate on a real PSA system. Chapter 4 discusses another experimental study aimed at concentrating and separating Methane from 75 % methane-25 % Carbon dioxide mixture via 3-bed bench scale Pressure Swing Adsorption set-up filled with 13-X zeolite. This study, itself, reveals the effect of feed throughput and also proves that the simulations and single-bed studies were accurate. Moreover, methane can be purified by using investigated PSA cycles and 13-X zeolite beds. Overall this study showed that the pipeline quality target of 97% CH4 purity with 90% CH4 recovery can be met by meticulously designing the PSA cycle and appropriate choice of operating parameters