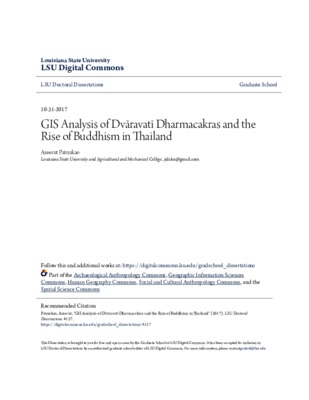 This dissertation explores how GIS as well as spatial and statistical analyses could be used to advance the understanding of Dvāravatī settlement and Dharmacakras locations. The research employs archaeological and geographical parameters to measure and quantify the patterns of Dvāravatī settlements, Dharmacakra locations, their interrelationship, and their relationship with environmental setting. The different types of spatial analyses, parameter settings within each analysis, and approaches are used to examine and explore the differences and commonalities of these variables at three different geographic levels: national, regional, and river basin levels. Four distinct approaches are incorporated in this study. Chi-Square analysis shows significant relationships between sites and certain spatial variables, including geology type, soil type, distance to the closest river, and elevation. The patterns of base and felly on Dharmacakras reflect an influence of their geographic locations and neighboring cultures. Currently, neither number of Dharmacakras nor their locations within the same site are adequate to indicate the regional centers or the boundary of Dvāravatī culture. However, the number of Dharmacakras relate to site-size which may highlight an importance of those sites. Additionally, the inscriptions found on Dharmacakras emphasize a significant knowledge of Dvāravatī artisans on the heart of Buddha’s teaching, the chain of causation, and the Four Noble Truths. These carefully selected texts are considered appropriate to be displayed on the Dharmacakras since both texts and Dharmacakras represent the first teaching of the Buddha, Dhammacakkappavattana Sutta. The KDE illustrates that the density of sites varies among three geographic levels. In general, Central Plain area and the river basins within this area have higher site density than other parts of the country. The greatest density is existed along the major rivers (e.g., Pang Prakong) or circled around the intersection of tributaries of the main rivers (e.g., Upper Chao Phraya). The NNA reveals a unified clustered pattern of Dvāravatī settlements and Dharmacakra locations at the national level, but the patterns vary from region to region and from river basin to river basin. Rank-size distribution analysis reveals a convex pattern of moated sites and Dharmacakra sites throughout the country which can be attributed to low system integration. Each settlement may be inhabited by an autonomous social group. Additionally, it may indicate the hindrance of communication by topography and poor transportation networks or discontinuous hierarchy. The results presented in this dissertation provide scholars with the necessary approaches to further investigate the settlement pattern in different cultures and scales based on possible available data