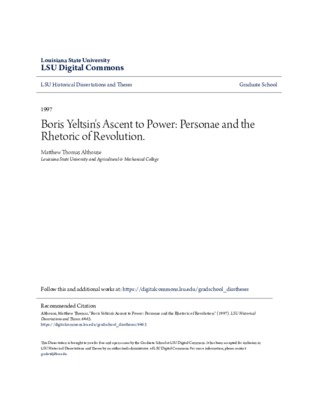 Boris Yeltsin\u27s Ascent to Power: Personae and the Rhetoric of Revolution.

This study is an examination of the rhetorical strategies utilized by Boris Yeltsin during his rise to prominence and his role in the second Russian revolution. By borrowing concepts from the study of revolutions in science, the author contends that Yeltsin used three distinct rhetorical personae, or modes of public presentation, to forward his discourse between 1985 and 1991. These personae include the revolutionary, the conciliatory, and the conservative. With this critical vocabulary, the author argues that Yeltsin\u27s successes and failures hinged on his fitting use of rhetorical personae in relation to four exigencies during the late-Soviet era: the evolution of perestroika, the decline of progressive perestroika, the emergence of the Russian presidency, and the unfolding of the August coup of 1991. This study serves to supplement revolutionary theory which needs further investigations concerning the ways radical leadership negotiates the course of a revolutionary movement