Nuclear transfer (NT) results in low success rates and research has reported problems with the welfare of cloned animals produced. Evidence suggests the use of a less differentiated donor cell, such as a stem cell, may lead to an increase in the efficiency of the NT procedure. Stem cell characteristics must be clearly defined in order to isolate, identify and optimally culture potential donor cells. Stem cell characteristics such as self-renewal and differentiation have not been identified in stem cells from porcine adipose tissue, an easily attainable tissue resource. The phenotypic profile of cell surface proteins and chromosomal stability of porcine adipose tissue-derived stem cells (pASCs) through in vitro culture have not been described. Also, research has not identified epigenetic modifications in adult somatic mesenchymal stem cells (MSCs) from porcine adipose tissue. The objective of Project 1 was to develop a protocol for the isolation and culture of pASCs and to determine stem cell-like characteristics. The objective of Project 2 was to characterize the surface protein phenotype of undifferentiated porcine ASCs and to determine the chromosomal stability through in vitro culture. The objective of Project 3 was to analyze pASCs and compare them to fetal porcine fibroblasts (FPF) for gene expression profiles of chromatin remodeling proteins, global methylation and acetylation patterns and methylated lysine residues within promoter regions of developmentally important transcription factors. Improved culture conditions and defined cellular characteristics of these pASCs have been identified. pASCs can self-renew and differentiate into multiple tissue lineages. Porcine ASCs do not express the stem cell surface markers analyzed at similar levels compared with those of human ASCs reported in the literature. Also, in vitro-cultured porcine ASCs used as donor cells for NT should be chosen from early population doublings (PDs) due to increased levels of aneuploidy at later PDs. Further characterization of porcine ASCs in this manner could assist the isolation and purification of a population of MSCs from the easily obtainable tissue of adipose that can later be tested as donor cells in nuclear transfer 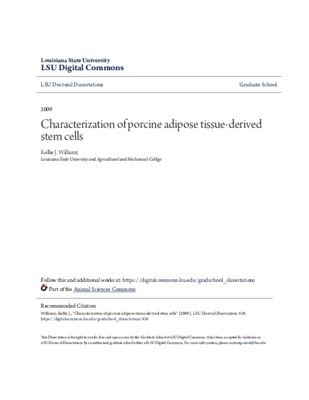