Domestication of organisms was one of the key strategies that led to the dominance of humans on the planet. Saccharomyces cerevisiae, brewer’s yeast, was one of the first organisms to be deliberately cultivated. This organism has been used in the production of alcohol since before written history(White, 2010). When S. cerevisiae runs out of oxygen, it undergoes anaerobic fermentation, which generates alcohol as a byproduct. Currently, various strains of this yeast are used in the production of the multi-billion dollar beer industry. The goal of this project is to generate a strain of yeast that has an accelerated fermentation rate without compromising the flavor profile of the resulting beer. Using conventional chemical mutagenesis, hundreds of independent strains of yeast have been developed and tested. We describe the methodology utilized to generate and characterize rapid fermentation strains and provide an approach to ultimately reduce production time in the brewing process 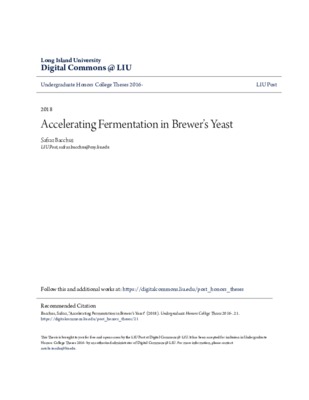 This paper was published in Long Island University.