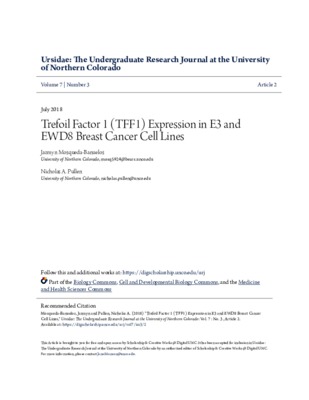 The ability to identify and treat cancer early can drastically improve patient survival outcomes. While much effort is placed on anti-cancer therapeutics, a developing area of interest is the identification of cancer biomarkers for the early detection of different types of cancer. Trefoil factors (TFFs) are a family of proteins whose known functions suggest that they may be major contributors to cancer; however, these proteins are understudied in a disease state like cancer. In this work, we identify expression of TFF1 among varying cancer types. We then investigate the correlation between varying levels of TFF1 expression and the aggressiveness of the cancer. Cell culture of seven different kinds of cancers was performed. Western blots were conducted, and the blots were probed for TFF1. After establishing TFF1 levels, we aimed to analyze cancer cell function through a series of cancer assays examining proliferation, viability, and migration. We hypothesized that there would be varying levels of TFF1 expression correlated to the functional characteristics of the cancer cells and that increased levels of TFF protein would support a more aggressive cancer. The breast cell lines tested were the only lines to express TFF1 and were less aggressive than the lines with no expression. Preliminary data suggest that TFF1 is also expressed by 4T1 cells, which we plan to further investigate by knocking down the proteins and observing for changes in aggressiveness of the cancer using migration, invasion, and proliferation assays in vitro as well as in vivo