Cognitive processing among video game players has been widely investigated. However, there has been serious debate regarding how methodological issues could be affecting these results. Our study is being conducted to assess the effects of covertly recruiting participants on performance in a Multiple Object Tracking (MOT) task. Covert recruitment conceals the role of video game experience in our study until after the cognitive task is completed. Additionally, we extend our research to include female participants, who have historically been omitted from cognitive video game research. The experiment began by administering the MOT task first, followed by a brief survey. The survey asked questions about how many hours each participant played, per week, of different genres of video games, as well as demographic information. Our results suggest that video game players (VGPs) of both genders perform better than non-video game players (NVGPs) when tracking a larger number of objects. This suggests that VGPs have an advantage in environmental awareness and visual short-term memory skills 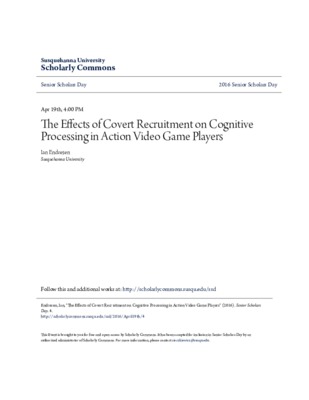 This paper was published in Susquehanna University.