Test-Retest Reliability and Minimal Detectable Change Scores for the Timed Up & Go Test, the Six-Minute Walk Test, and Gait Speed in People With Alzheimer Disease

Background. With the increasing incidence of Alzheimer disease (AD), determining the validity and reliability Of Outcome measures for people with this disease is necessary. Objective. The goals of this study were to assess test-retest reliability of data for the Timed Up & Go Test (TUG), the Six-Minute Walk Test (6MWT), and gait speed and to calculate minimal detectable change (MDC) scores for each outcome measure. Performance differences between groups With mild to moderate AD and moderately severe to severe AD (as determined by the Functional Assessment Staging [FAST] scale) were Studied. Design. This was a prospective, nonexperimental, descriptive methodological study. Methods. Background data collected for 51 people with AD included: use of an assistive device, Mini-Mental Status Examination scores, and FAST scale scores. Each participant engaged in 2 test sessions, separated by a 30- to 60-minute rest period, which included 2 TUG trials, I 6MWT trial, and 2 gait speed trials using a computerized gait assessment system. A specific cuing protocol was followed to achieve optimal performance during test sessions. Results. Test-retest reliability values for the TUG, the 6MWT, and gait speed were high for all participants together and for the mild to moderate AD and moderately severe to severe AD groups separately (intraclass correlation coefficients \u3e=.973); however, individual variability of performance also was high. Calculated MDC scores at the 90% confidence interval were: TUG=4.09 seconds, 6MWT=33.5 m (110 ft), and gait speed=9.4 cm/s. The 2 groups were significantly different in performance of clinical tests, with the participants who were more cognitively impaired being more physically and functionally impaired. Limitations. A single researcher for data collection limited sample numbers and prohibited blinding to dementia level. Conclusions. The TUG, the 6MWT, and gait speed are reliable outcome measures for use with people with AD, recognizing that individual variability of performance is high. Minimal detectable change scores at the 90% confidence interval can be used to assess change in performance over time and the impact of treatment. © 2009 American Physical Therapy Associatio 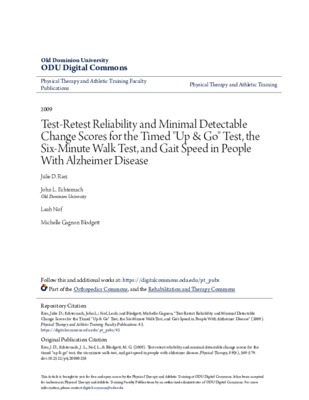 This paper was published in Old Dominion University.