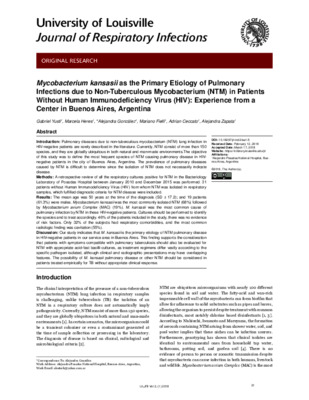 Mycobacterium kansasii as the Primary Etiology of Pulmonary Infections due to Non-Tuberculous Mycobacterium (NTM) in Patients Without Human Immunodeficiency Virus (HIV): Experience from a Center in Buenos Aires, Argentina

Introduction: Pulmonary diseases due to non-tuberculous mycobacterium (NTM) lung infection in HIV-negative patients are rarely described in the literature. Currently, NTM consist of more than 150 species, and they are globally ubiquitous in both natural and man-made environments.The objective of this study was to define the most frequent species of NTM causing pulmonary disease in HIV-negative patients in the city of Buenos Aires, Argentina. The prevalence of pulmonary diseases caused by NTM is difficult to determine since the isolation of NTM does not necessarily indicate disease. Methods: A retrospective review of all the respiratory cultures positive for NTM in the Bacteriology Laboratory of Posadas Hospital between January 2010 and December 2015 was performed. 31 patients without Human Immunodeficiency Virus (HIV) from whom NTM was isolated in respiratory samples, which fulfilled diagnostic criteria for NTM disease were included. Results: The mean age was 50 years at the time of the diagnosis (SD ± 17.2); and 19 patients (61.3%) were males. Mycobacterium kansasii was the most commonly isolated NTM (68%) followed by Mycobacterium avium Complex (MAC) (19%). M. kansasii was the most common cause of pulmonary infection by NTM in these HIV-negative patients. Cultures should be performed to identify the species and to treat accordingly. 46% of the patients included in the study, there was no evidence of risk factors. Only 32% of the subjects had respiratory comorbidities, and the most common radiologic finding was cavitation (55%). Discussion: Our study indicates that M. kansasii is the primary etiology of NTM pulmonary disease in HIV-negative patients in our service area in Buenos Aires. This finding supports the consideration that patients with symptoms compatible with pulmonary tuberculosis should also be evaluated for NTM with appropriate acid-fast bacilli cultures, as treatment regimens differ vastly according to the specific pathogen isolated, although clinical and radiographic presentations may have overlapping features. The possibility of M. kansasii pulmonary disease or other NTM should be considered in patients treated empirically for TB without appropriate clinical response