Through the privatization of childcare in Wisconsin, thousands of impoverished, under-educated and low skilled African-American women became micro-enterprising entrepreneurs. In 2006 through the instituting of Wisconsin Shares (Shares), Wisconsin’s low-income childcare program, the average family daycare provider in Milwaukee County earned over $50,000 a year (Pawasarat and Quinn 2006). Drawing on neoliberal ideas of micro-enterprising entrepreneurship, these women were successful, but this success appeared to not align with the architects of Shares. Loic Wacquant (2009, 2012) argues that neoliberalism should not be viewed as market strategies or exercises, but rather, it should be viewed as a quintessential political project that thrives off of the marginalization and stigmatization of impoverished communities. According to Wacquant, we must view the post-Welfare Reform legislation such as workfare and prisonfare as “Two strands of government action toward the poor” that have adopted ideas of behaviorism that rely on: “Deterrence, surveillance, stigma, and graduated sanctions to modify conduct (288). Due to Wisconsin’s leadership in workfare and prisonfare, perhaps no other state offers a better case where one can witness “Institutional machinery and symbolic frames through which neoliberal tenets are being actualized” (Wacquant 2010). The Milwaukee Journal Sentinel’s reportage on post-Welfare Reform was intended to reveal childcare fraud, but it promoted a policy narrative that appeared to align with the state’s (in the form of Wisconsin Department of Children and Families (DCF) and the state legislature) expedited policy shifts which had unintended consequences for many hardworking and law-abiding low-income childcare providers. In this dissertation, I argue that the manner in which the DCF and the state legislators dismantled one of the only viable industries in Milwaukee County’s poorest areas during the states’ crackdown on childcare fraud has had devastating effects on childcare providers in Milwaukee. While the initial years of the Shares program may align with the progressive potential of neoliberalism to assist impoverished communities, the consequences and effects of the program as it was restructured—also using neoliberal logic, compels me to draw on Loic Wacquant’s theories of neoliberalism to analyze the experiences of childcare providers in Milwaukee’s post-Welfare Reform landscape. This dissertation explores a group of business-savvy, highly-educated entrepreneurs who either lost their businesses and/or weathered the storm of Wisconsin’s crackdown on fraud. I interviewed people from all walks of life, who entered into the childcare profession for many different reasons. Through their testimonies and insights into the $350 million childcare industry which they helped to build, and during the hostile climate that erupted during Wisconsin’s crackdown of fraud campaign, I found five recurring themes that were important to my participants, which were as follows: (1) They believed that race was a significant representational factor in the Milwaukee Journal Sentinel’s coverage, the DCF’s protocols, and the passage of Act 76 and 77; (2) They had their own evaluations of YoungStar (Wisconsin’s childcare quality rating system) and (3) there were problematic aspects of the DCF’s attempts to quantify care; (4) There is a need for culturally sensitive childcare governance that takes into consideration cultural norms in socializing children and (5) There is a need and their desire for African-American childcare providers to have a more prominent participatory voice in the childcare discourse produced by all levels of government. This study constitutes 28 months of ethnographic research, which began in August 2011 and ended January 2014 and was conducted in Milwaukee, Wisconsin. In total, I conducted 47 interviews 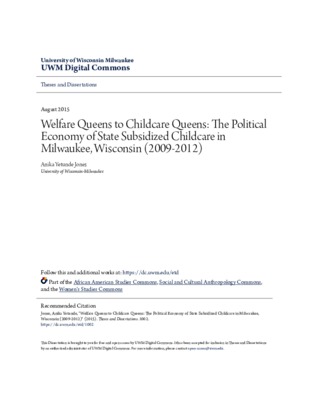