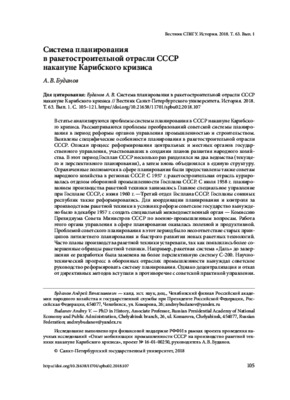 The article presents a detailed analysis of the problems in the planning system in the USSR before the Caribbean Crisis (The Cuban Missile Crisis). The author examines the problems of the Soviet planning system during the period of reforms in management of industry and construction. The article reveals specific features of the planning in the rocket production sector in the USSR. It also describes the process of reorganization of the central and local government bodies participating in making plans for the development of the national economy. Over this period the State Planning Committee of the USSR had been divided into two departments (for short-range and long-range planning) several times, and then they were again merged in the uniform structure. Limited authority in the sphere of planning was also conferred on councils of the national economy in regions of the USSR. Since 1957 the missile production branch had been supervised by the department of the defense industry of the State Planning Committee of the USSR. Since July, 1958 the chief special department of the State Planning Committee of the USSR had been entrusted with planning of the rocket production, since June, 1960 — the Third department of the State Planning Committee of the USSR. State Planning Committees of federal republics were also reformed. Given the period of reforms, the Soviet state had to establish a special interdepartmental body — the Commission of Presidium of Council of ministers of the USSR on military-industrial questions in December, 1957 with a view to coordinating planning and control of rocket production. The work of this body in the sphere of planning was useful and productive. The discrepancy between the old principles of five-year plans and rapid development of new rocket technologies posed a problem for the Soviet planning during this period. Plans for production of rocketry often became outdated with the emergence of more perfect samples of rocketry. For example, before the completion of the development of the missile system “Dalˮ (Distance) it was replaced with a more advanced S-200 system. Scientific and technical progress in branches of defense industry forced Soviet authorities to reform the system of planning. However, decentralization and refusal to resort to the directive methods of planning contradicted the Soviet practice of management. As a result, after N. S. Khrushchev’s resignation reforms in the sphere of planning were suspended.Исследование выполнено при финансовой поддержке РФФИ в рамках проекта проведения научных исследований «Опыт мобилизации промышленности СССР на производство ракетной техники накануне Карибского кризиса», проект № 16-01-00250, руководитель А. В. Буданов