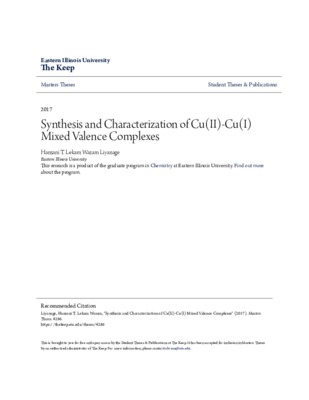 Our study was focused on synthesis and characterization of new family of metal complexes that mimic the active site of copper containing enzymes. Our approach focused on preparing a series of metalloligands which vary systematically in structure and use them in combination with additional metallic centers to synthesize our desired complexes. We synthesized a main ligand, which is named as HLQ 2Pz, which contain a quinoline body, one amide bond and two pyrazolyl rings. We synthesized a copper complex by deprotonating HLQ 2Pz using KOH. The ligand coordinated to the copper(II) center through its quinoline nitrogen, two of the pyrazolyl nitrogen and deprotonated amide nitrogen. Acetonitrile, which was used to recrystallize the compound solvent, filled the fifth coordination site of the copper. The synthesis of metalloligands were done by replacing the acetonitrile with deprotonated acids such as bis(pyrazolyl)acetic acid and 1,3-bis(pyrazolyl)-2-butanoic acid which has additional coordination sites. These metalloligands were combined with additional metallic centers using metal salts such as Cu(CH3CN)4PF6 and (Ph3P)2CuNO3 as the final step. This gave Cu(II)-Cu(I) mixed valence complexes like the active sites of multicopper enzymes. All the above-mentioned ligands were characterized by 1H-NMR and IR spectroscopies. All the complexes were characterized using X-ray crystallography and UV-Vis, IR spectroscopies