Time-Delay and Doppler Tests of the Lorentz Symmetry of Gravity

Modifications to the classic time-delay effect and Doppler shift in general relativity (GR) are studied in the context of the Lorentz-violating standard-model extension (SME). We derive the leading Lorentz- violating corrections to the time-delay and Doppler shift signals, for a light ray passing near a massive body. It is demonstrated that anisotropic coefficients for Lorentz violation control a time-dependent behavior of these signals that is qualitatively different from the conventional case in GR. Estimates of sensitivities to gravity-sector coefficients in the SME are given for current and future experiments, including the recent Cassini solar conjunction experiment 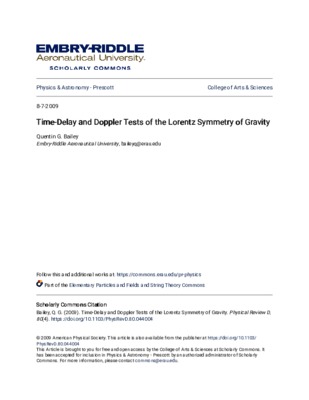 This paper was published in Embry-Riddle Aeronautical University.