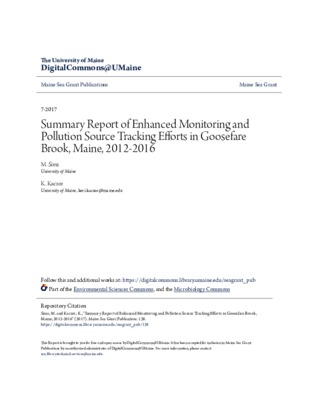 The Goosefare Brook (GFB) forms the border between the City of Saco to the south and Town of Old Orchard Beach (OOB) to the north. In response to concerns over water quality in the mouth and adjacent beach water, the Maine Healthy Beaches (MHB) program has supported multi-year enhanced monitoring and pollution source tracking efforts, held Stakeholder Workshops, and more to address impaired water quality throughout the watershed. Over the past five years, the MHB program has focused primarily on paired enterococci and optical brightener samples in OOB’s New Salt Rd. Tributary (NSRT). This work identified widespread bacterial contamination throughout the tributary as well as two priority regions likely impacted by human-sourced fecal contamination. In 2016, 36 samples were collected during eight events at nine sites within the two priorty areas identified through previous source-tracking efforts. Parameters tested include enterococci (ENT), optical brighteners (OBs), and microbial source tracking (MST) DNA analyses. ENT values ranged from 31 to 10,462 MPN/100mls with a combined geometric mean of 1,021 MPN for all sites. OB values ranged from 50 to 144 μg/l with a combined mean of 95 μg/l for all sites. All samples were tested for mammal and human DNA (presence/absence) and a subset of samples were also tested for the presence of bird, ruminant, and canine DNA. All samples tested positive for mammal DNA whereas percent detection of human sources varied between the two priority regions (mouth vs. marsh). Human sources were detected consitently in the mouth region with seasonal spikes in signal stregth during July and September, the portion of the year when OOB experiences its peak population comprised primarily of seasonal residents and visitors. Human sources were detected intermittely at marsh locations, potentially pointing to occasional use of a residence and/or groundwater transport of pollution sources. Bird DNA was detected in all samples tested and the signal strength remained consistent throughout the season for both regions. No ruminant or canine was detected in samples tested. The pollution source tracking tools used as part of this study were combined into a risk factor analysis highlighting sites potentially impacted by human sources of fecal contamination. It is recommended that OOB prioritize investigations in these priority regions to identify and remove sources of human sewage. As part of ongoing efforts to address water quality in the GFB, both municipalities have investigated and removed sources of human wastewater, have expanded and upgraded sewer and stormwater infrastructure, and have worked together to acquire supplemental funding to complete a watershed management plan and begin implementation of best management practices (BMPs). However, persistent human-sourced contamination issues underscore the need to continue investigations to ensure the integrity of wastewater disposal methods throughout the GFB watershed