OSIRIS-REx is NASA\u27s third New Frontiers Program mission, following New Horizons that completed a flyby of Pluto in 2015 and the Juno mission to Jupiter that has just begun science operations. The OSIRIS-REx mission\u27s primary objective is to collect pristine surface samples of a carbonaceous asteroid and return to Earth for analysis. Carbonaceous asteroids and comets are \u27primitive\u27 bodies that preserved remnants of the Solar System starting materials and through their study scientists can learn about the origin and the earliest evolution of the Solar System. The OSIRIS-REx spacecraft was successfully launched on September 8, 2016, beginning its seven year journey to asteroid 101955 Bennu. The robotic arm will collect 60-2000 grams of material from the surface of Bennu and will return to Earth in 2023 for worldwide distribution by the Astromaterials Curation Facility at NASA Johnson Space Center. The name OSIRIS-REx embodies the mission objectives (1) Origins: Return and analyze a sample of a carbonaceous asteroid, (2) Spectral Interpretation: Provide ground-truth for remote observation of asteroids, (3) Resource Identification: Determine the mineral and chemical makeup of a near-Earth asteroid (4) Security: Measure the non-gravitational that changes asteroidal orbits and (5) Regolith Explorer: Determine the properties of the material covering an asteroid surface. Asteroid Bennu may preserve remnants of stardust, interstellar materials and the first solids to form in the Solar System and the molecular precursors to the origin of life and the Earth\u27s oceans. Bennu is a potentially hazardous asteroid, with an approximately 1 in 2700 chance of impacting the Earth late in the 22nd century. OSIRIS-REx collects from Bennu will help formulate the types of operations and identify mission activities that astronauts will perform during their expeditions. Such information is crucial in preparing for humanity\u27s next steps beyond low Earthy orbit and on to deep space destinations 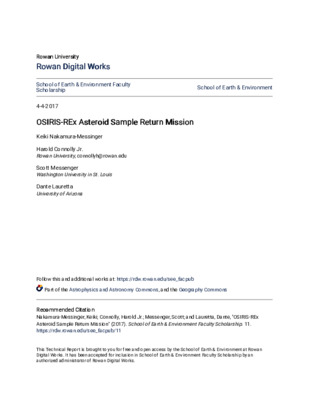 This paper was published in Rowan University.