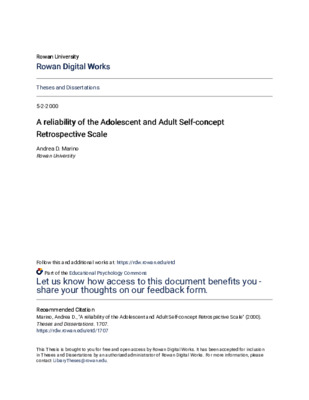 A reliability of the Adolescent and Adult Self-concept Retrospective Scale

The purpose of this study was to establish test-retest reliability coefficients for the Adolescent and Adult Self-Concept Retrospective Scale (AASRS). This study utilized a one-week duration between test administrations for the test instrument. There were thirty-one college students used, ranging in age from eighteen to twenty. The AASRS is an individually administered, interview-type self-concept measure. The version of the test used in this study is designed for older populations. The Pearson product-moment correlation statistical procedure was used to calculate the correlation coefficients for this sample. The correlations for both the Global and Distortion Indexes were calculated. The correlations were found to be statistically significant. It was concluded that the AASRS demonstrated strong test-retest reliability